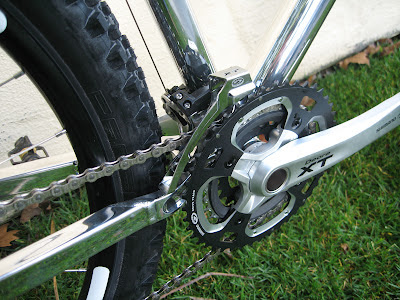 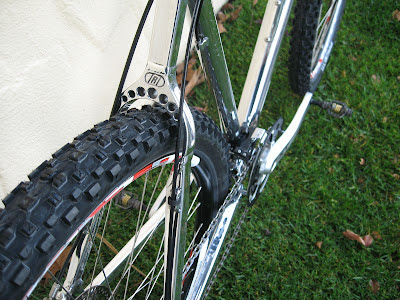 Mike Ahrens sent us a few images of his newly built 650B Prototype. Enjoy.
Posted 9:29 PM No comments: 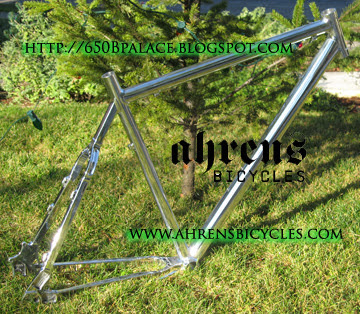 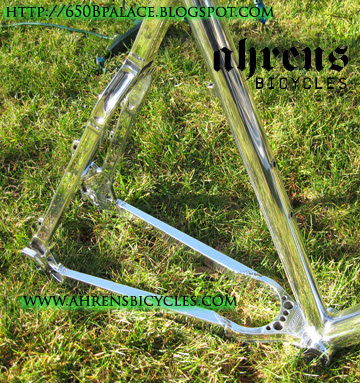 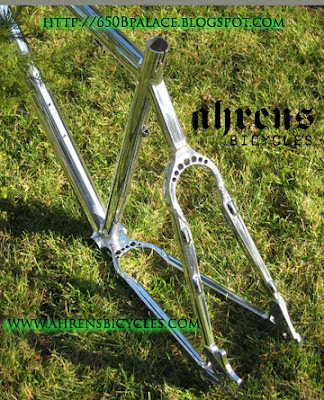 Mike Ahrens was kind enough to share some images of his 650B prototype. Photo'd here, it had just returned from the polishers. Hi-Shine! Nice Ahrens CS and SS yokes, dropouts and 7000 Series BB shells are available to frame builders, or tinkerers. Check out their page on the web at www.ahrensbicycles.com . They also sponsor the Vanderkitten Team. Meow. On top of all that, they produce the WISECRACKER, for your bottle opening pleasure!
Posted 8:33 AM No comments:

Yes, the F29 is approved to work with a wheel larger than a 26" (i.e. 650B).
Yes, Fox is covering their rear with this notification.
Yes, the Neo-Moto, at 702 (+/- 5mm) is close to many large-volume 26" tires on the market. Rock Shox does not recommend the use of 650B wheels either, BUT will that stop us from using them? Probably not. Anyone out there completely read their suspension fork owners manual? A lot of the things we do and ride would be considered 'out-side the realm of standard use' for many forks. Fork manufactures have loads of liability on their shoulders as it is. Now we, as consumers, are dabbling with things many of the makers have not. When I called X-Fusion about the Velvet, back in July, they hadn't heard much of anything about the 650B MTB wheels. Carl at Vicious was probably just putting the Neo-Moto in a Fox Fork for the first time that same month. White Bros. didn't change ANYTHING to their 650B fork besides machining the sliders half-way between 26" and 29" designs.
FOX and RS ARE just covering their butts with their official (Only FOX) releases.
Manitou, on the other hand, is attempting to cobble a 650B fork together from parts they currently offer (or offered- old stock stuffs).

You can rest assured, when news like this is released you'll find it here on the 650B Palace blogsite! THANK YOU AND GOOD NIGHT
Posted 10:54 PM 1 comment:

A message from the FOX FACTORY: 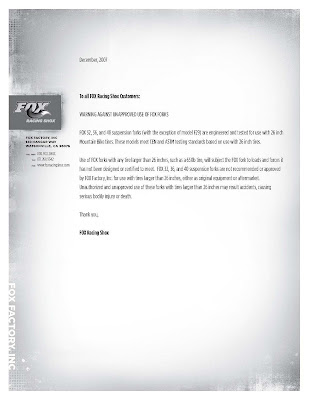 As many of you know the FOX forx do FIT the Neo-Moto, but Fox doesn't recommend it. Use EXTREME CAUTION!
...as you were.
Posted 7:26 PM 3 comments:

My Voo Doo Bokor show'd upFriday, just as we were closing! I'm super excited to build this one up! Clearance is looking good! The Sliders on the rear allow for good clearance, and room to move back. SO, I'm building this as a Single Speed to begin with. I'm out of shifters and rear dérailleurs! I guess I have too many projects going on! 650B bikes are sucking my life force.....AAHHH. I'm hooked.
17" Bokor frame
X-Fusion Velvet R up front.
American Classic SS hubs on Velocity Blunts, not American Classic rims.
I'll finish the build this weekend! Last night I had enough time to face and ream the head tube and install headset, and face and chase the BB. The BB wasn't bad, but the head tube NEEDED it.
The Prebuild: 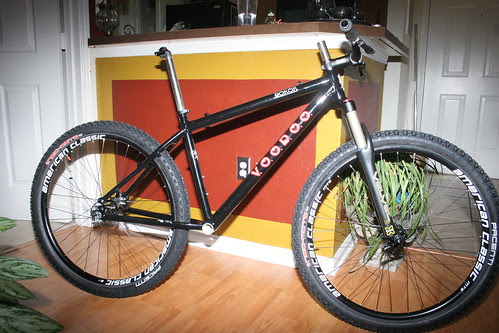 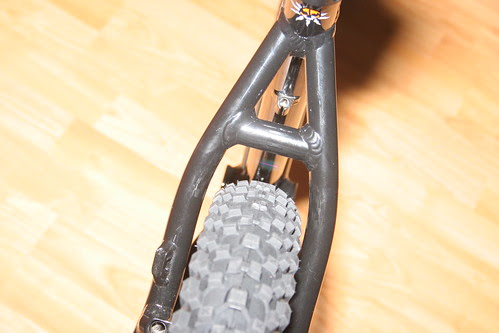 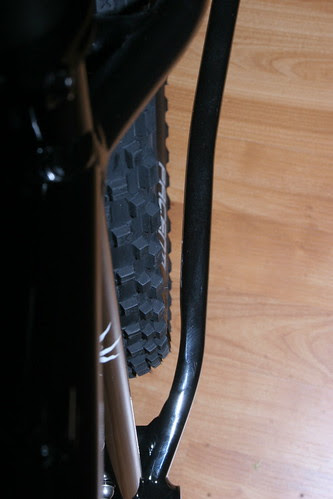 A little bird dropped these off in my mail box. 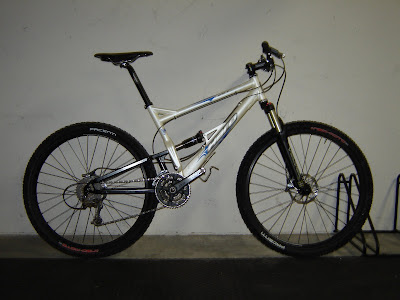 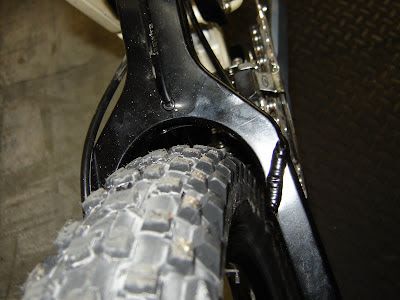 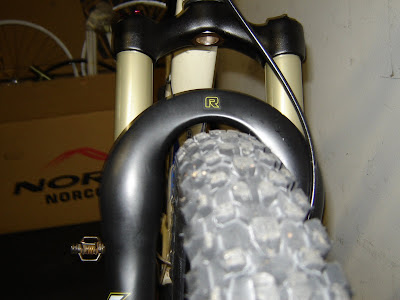 Haro is playing around with their Sonix line, and built a custom rear triangle to accept The Ne0-M0t0 tire from Pacenti. Look like they're taking a page from my book, and using the killer X-Fusion Velvet R. Seriously, its a perfect fork for 27.5" wheels. I spoke with Jill from Haro at interbike, and this is exactly what she mentioned for the Sonix line in regards to the possibility for 650B wheels. If this build interest you, stop by MTBR's Haro forum and let them know. For Sonix owners ( like myself) a True 650B Sonix may only be a rear triangle away!
These images were sent via thrid party, but originated with Haro. I had also read they may be doing a 29" version of the Sonix in the future.
Posted 7:16 AM No comments:

The folks over at Rock Lobster have been doing some thinkin' outside the box! The R.L. Team Mechanic has this steed beneath'm now. "Fun" To quote him, "Fun." A cruiser like ride for getting to the races in style, and aboard 650Bs. If you read his Blog, http://rye-spinnwrenches.blogspot.com, Rye is still in paint mode with the custom fork, which, in my opinion, looks stellar. I really dig lugged disc forks, kinda like our 650B MTB wheel...New-Retro. WHO KNOWs where he found them Super Champ B'r rims, but he sure put'm to good use. (Note: Baby Bear was the original name for the NEO-M0t0, same time, same manufacturer, different name).
Good Work Rock Lobster.... I dig it. 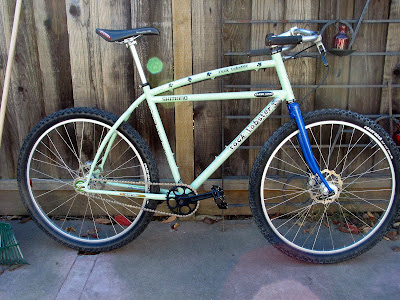 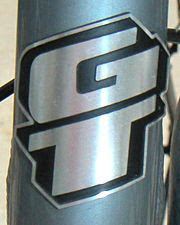 With Kenda announcing they will be entering the 650B market and supplying, possibly, 3 tires, one thinks GT would quickly jump on board. It seems GT tends to specs good ol' Kenda rubber on A LOT of their bikes. Their 29'r offering was pretty weak, with the Peace 9'r. An EBB equipped frame without a disc brake option....very odd. They could have very well used less expensive horizontal drops, a cross over from their BMX line perhaps. Oh well, I'm not designing the bikes, so who am I to talk. I digress... GT, wanna hop aboard the 650B Members Only club? C'mon in, the water's fine!
Posted 10:26 PM 4 comments: 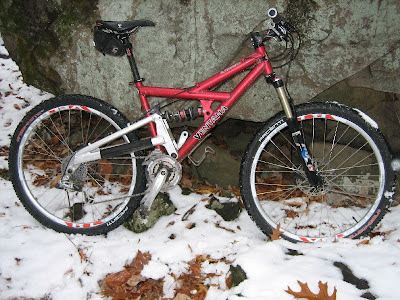 This El Chamuco sports 6" on the reat and 5" on the front, perfect if you ask me. At full compression 6mm of clearance remains between the tire and seatube, perfect. As a 26" bike the BB was a bit low, now 650B equipped has just that much more clearance, perfect. Too bad Ventana doesn't have these in production anymore.....but perhaps a production B'r based on this platform can bring light to a retired model.....hmmm, ponderous.
Check out the rest of the Ventana Line HERE

To clear things up on clearance! 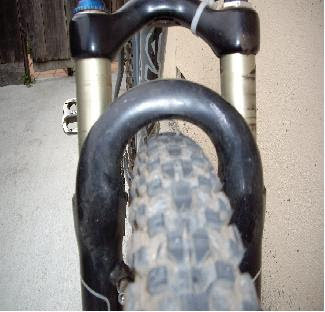 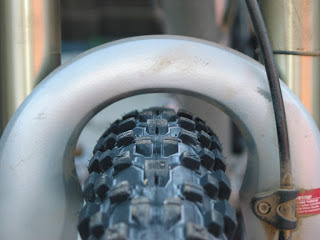 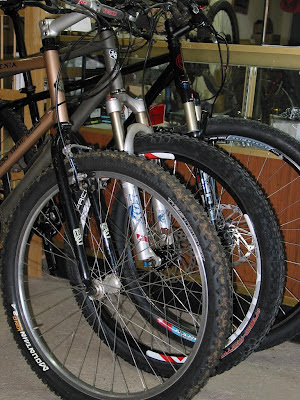 You know you want it!! 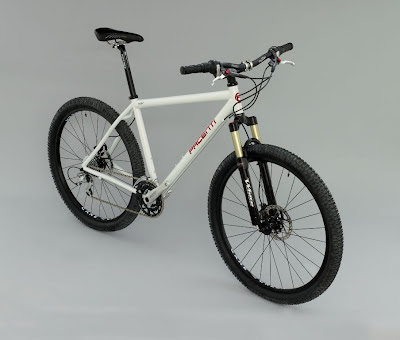 Kirk Pacenti is raffling the 21st Century's FIRST MTB 650B. GO HERE TO GET A RAFFLE TICKET!

http://www.bikereg.com/events/register.asp?eventid=5556
The raffle will run through March 10th, 2008. There will be a minimum requirement of 400 tickets sold for the raffle to be valid. If fewer than 400 tickets are sold the raffle will be extended until the minimum is reached.
The price of the raffle ticket will not include the Bikereg.com service fee of $4.60. If the minimum of 400 tickets are not sold after a reasonable extension period, the raffle may be ended and winner drawn or participants may receive full refund, less the Bikereg.com service fee of $4.60. This decision will be made at the discretion of Pacenti Cycle Design.
NOTE: All proceeds from the raffle will be used to produce more 650B tire designs. So, if you think 650B wheels are a good idea show your support by buying a ticket! This bike is used but in excellent condition. The bike will be professionally tuned, packaged, insured and shipped world wide at no cost to the raffle winner. 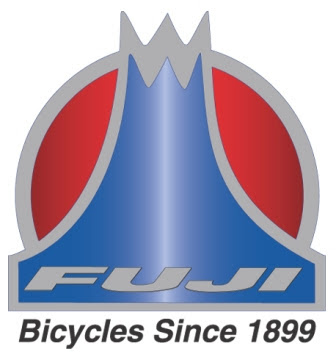 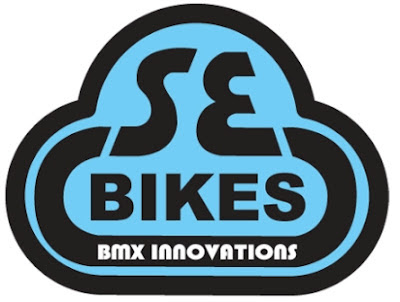 News break!
Fuji, owners of SE Bikes ( formerly known as SE Racing), is testing the 650B wheel size. Will it be enough to put Fuji on the map in the MTB world? Lets hope they believe so. The SE Bikes seems to sell well, and for '08 they've brought in a line of fixie/SS skinny tire bikes. They also have the Stout 29" SS. Last I knew they had the BM Flyer, an aluminum geared ready 29" bike ( I guess they discontinued it). Hope they jump in the 650B market!
Posted 1:16 PM No comments:

Sale on 650B Compatible Forks!

If your stop by often you probably read that the Manitou Nixon Comp 145 accepted the Neo-Moto without problems.
GreenFish Sports is closing them out for $249 in the QR Version (CLICK HERE)

BikeNashBar has the 20mm Thru version for $199 (CLICK HERE)

Any of you freeride, beef-eaters with 1.5 headtubes wanting to try 650B for shredding CAMBRIA BICYCLE OUTFITTERS should be on your TO-DO List. The Manitou Stance BLUNT is UNDER $100 (CLICK HERE)
I may have to get one because its so ridiculously cheap.

And for you rigid riding folks, pick up the Surly 1x1 Fork at Cambria also
Posted 1:02 PM 1 comment: 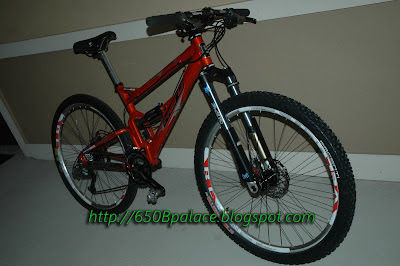 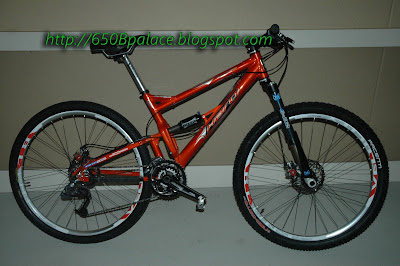 Ok, I hope to hit the trail later this morning with the Maverick equipped Haro Sonix VL120. I have a little more tweaking to do, but she'll run just fine for now. I just finished building this set of wheels, and installing the fork. I haven't yet installed the travel reducers, as I was unable to get the tire close enough to the crown to worry. I'm not going to cut them down initially. It was recommended to me to have some fab'd. Anyone up to the task, pro-bono? I can email out the current spacer spec, and what I would need made. A future market perhaps? And no, my saddle isn't properly adjusted.
Posted 2:30 AM 1 comment:

Peter Verdone at PVDWiki.com, telling it like it is. Through his eyes.
He built a 650B from the ground up, fabricated the frame, and did his homework for fork compatibility.
Check it out here:(click Photo) 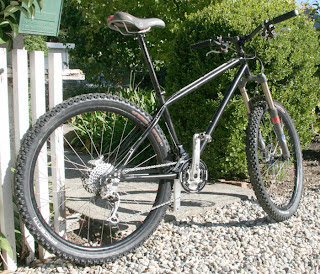 A long way Down.

Expect to see 2 hardtails 650B models from the BMX roots company HARO. This won't be any time soon, keep watching for conversion possibilities until 2009 models hit.
I currently have the Sonix with the virtual link as my FS ride. (650B equipped) I couldn't run a Ne0-M0T0 on the back though, so I picked up a cheap, low knob substitute. It clears with the stock front derailleur changed. I'll post an image tomorrow, as I am currently swapping out forks. My alternative tire was an ebay purchase, and I wouldn't recommend it for substantial off-road use.
Posted 8:41 PM No comments: