I should have done this last night - but it was late and I forgot. Here's my current 650b bike. It is based around a 44 Bikes SnakeDriver frame and currently set up rigid and single speed with a Salsa Cromoto Grande fork up front. 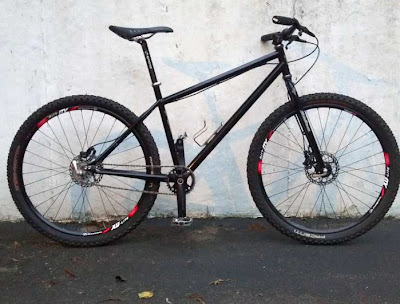 Although I'm constantly fiddling and experimenting with different stem/bar combinations with it.

New Contributor - Thanks for the Invite Jeremy!

For my first post to the Palace I thought I'd take the opportunity to introduce myself. My name is Mark McGrath - many of you will know me as MMcG on the forums - and I'm psyched to be a contributor to 650B Palace. A Huge thank you to Jeremy for letting me contribute to the blog.

I'm stoked on this wheel size and excited to contribute to spreading the word a bit and sharing cool 650b related news and stories of interest for all of you.

I've been riding mountain bikes since 1999 or so (not that long compared to a lot of you guys I suspect) and I've really gained a passion for bicycles. I started to really get into mountain bike riding when I moved to CT in 2001 and that eventually led to a part time sales rep gig with Balfa Cycles. Some of you might remember the Balfa BB7 and 2Step as well as the Belair and Minuteman (their hardtail frame). After my Balfa stint was over due to Procycle pulling the plug after the 2004 frames were released, I then started to become interested in bigger wheels.

After various 26" hardtails and FS bikes, I finally got my first 29er in a Surly Karate Monkey. From there I was on various 29ers for a few years, including a brief stint helping out Ted Wojcik with his custom frame building business and helping to promote his new 29er frames - initially named the Monkeybutt 29ers and now called his Sof-Trac 29ers.

Then I heard about this new 650b wheelsize and I decided to give that a go. First it was a test and review of a Haro Beasley for www.ridemonkey.com and then it was on to a Carber Bumblebee long term test for Ridemonkey. This really helped me realize the good virtues of the 650b platform - especially for a guy like me who stands about 5'9" tall.

I'm now riding a bike built by Kris Henry - of 44 Bikes. My frame is Kris' original SnakeDriver prototype and it now sports 650b wheels and a Salsa Cromoto Grande rigid fork. I've got it set up in single speed mode right now, but the frame allows me the option of going 1x9 or whatever if I so desire.

I've found the 650b wheels to be the ideal configuration for this particular frame as it puts the bottom bracket height in a "sweet spot" - the bike really shreds turns now in this configuration.

I like it so much that I plan to add more 650b wheeled bikes to the stable over time.

In addition, I plan on posting to the Palace often about 650b news, 650b bikes, and 650b rumors etc. Probably even a feature or two on builders who are doing a lot of work with 650b wheels - like Yipsan, Watson Cycles right here in CT, 44 Bikes etc. etc.