Though not mountain bikes, Rivendell Bicycles is offering two new 650b wheeled bikes in 2009.
The Betty Foy is ladies mixte frame. Lugged, and Taiwanese produced.

And the
Sam Hillborne is the traditional version.
This bike uses 650b wheels on sizes 48cm & 52cm.

To quote Rivendell on 650B,
"The wheels are 650B. Five years ago, were rare in the U.S., but no more. It's well-supported in this country--it's even trendy--and has a secure future."

What would you say if...

That's right, your prayers have been answered. A 2.1" version of the acclaimed Neo-Moto is in the works. MTBR's BEST, just got a little smaller! The Neo was the precedent for 650b knobbies, and won't go down without fight! Pacenti has pushed the production of the Mini-Moto, a 650b x 44 tire, back in favor of the narrower Neo. Quite the line up of tires is emerging!
Meanwhile, Kenda has yet to deliver their 2.3 and 2.1 Nevegal in the 650b format.
Cross you fingers for a Pre-Sea Otter release of the 2.1 Neo!!!

Pictured is the 2.3" Version

I think there are enough tire companies onboard to suggest this as a viable wheel size!
Forks? Hello? ...Bueller?
Posted 3:22 PM 4 comments: 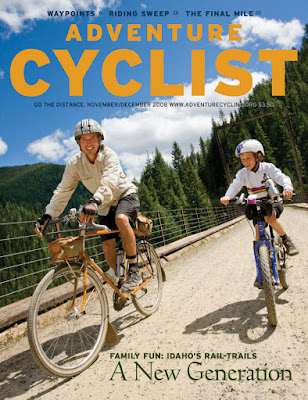 Just before the Thanksgiving holiday the new issue of Adventure Cyclist arrived in the mail (thank you subscriptions). I look forward to this periodical with my rising interest with long distance riding and the potential of just, one day, getting lost (way lost) on my bike. Anyways, there is no mention of 650B wheels or bikes in the current Nov/Dec 2008 issue, but, alas, a 650B wheels bike graces its cover.
The Rivendell Saluki is, and has been, available so sometime now. It also was one of the base insparations for the original Rawland line of bikes: the Sogn and Olaf. The Saluki is available with canti-lever brake posts or traditional caliper style mounting. Grant Petersen is the mastermind at Rivendell. Stop by their website at www.rivbike.com.
As for the Adventure Cyclist, they are an awesome organization AND magazine. www.adventurecyclist.org for more info!
Aaron Teasdale and his son, Silas, grace the cover. Aaron also acts as the Deputy Editor for the Adventure Cyclist publication!
For now, go get lost on your bike!
Posted 11:07 AM 1 comment: