Quasi Moto Tires Are Back in Stock

Your favorite distributor should have the Quasi Moto back in stock and ready to ship. Have your LBS place an order and get rocking on one of the BEST selling tires for 650B off road!

Is It June Yet?

June. We are SO close! Why June, you ask? Well, because the 2.1 Neo Moto lands in JUNE. That's why! Pacenti Cycle Design had a HUGE, and shocking, hit with the 2.0 Quasi Moto, so follow up tire had to be a NEED rather than a want. Folks demanded a smaller volume, aggressive knob'd tire, so Pacenti will be soon delivering the 2.1" NEO MOTO. When they land 650BPalace will be the first with official images of the tire. Originally, the tire line-up was to be Neo Moto, Quasi Moto, and Mini Moto. There are also rumors of another tread coming from Pacenti, as they have pushed back development of the Mini Moto. Only a rumor as I haven't gotten any word on the tread design or pattern.
And what are those damn fork makers up to? Maverick can custom tune your DUC or SC32 for 650B use. X-Fusion's 2010 model will be 650b ready. White Bros are still kicking out their Magic and Fluid 650B models. These manufacturers are definitely helping the cause when it come to a safe fork choice, but the population is still not happy. Why couldn't the Rock Shox Pike be tuned specifically for 650B? The 2.3" Neo clears the arch. How about a travel limitation added to a 650B specific Pike?
Anyways, check back VERY soon for news on the 2.1" Neo Moto. They will be available directly through Pacenti Cycle Designs by visiting www.bikelugs.com 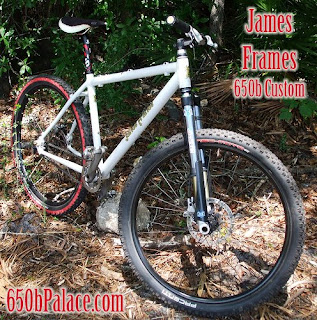 The chain line is killer as well. JP nailed it, but the American Classic single speed hub has a load of adjustment, too. The cassette body is approximately 15mm wide and the cog can be placed anywhere on it. I am using the Endless Kick-ASS cog, which in fact, kicks ass. Ultra light weight, and solid. It is a nice compliment to the American Classic's sensitive aluminum carrier with its wide base.
I have had a few 650B conversions, and this James Frames is my second purpose built 650B, and it totally RAILS. My initial take on the bike was that I was sitting higher than I liked, but that has since changed. It is a very nice longer travel XC bike with the Maverick SC32. Well, since the SC32 has been tuned to a 4" travel, it is closer to a standard XC length travel. In time I will return the X-Fusion Velvet to this bike and run it at a full 130mm, but for now the 10cm is fine, no GREAT.
Posted 11:05 PM 4 comments:

No, I haven't gotten my grubby paws on one yet but there is a write up on the web.
Follow the link (click image) 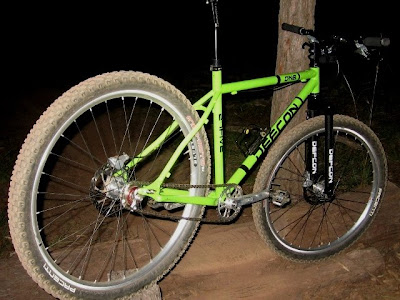 Dirt Rag: They're giving it away!

Each month Dirt Rag offers up a Sweepstakes Bike each month, for free. FREE. They've given away Commencals, Diamond Backs, Gary Fisher, and everything in between.
This months give-away is a CARVER KILLER BEE. That's a titanium frame fro those who don't know. They are available with stock geometry and custom. If you win, you get to pick the geometry. WHOA. Free CUSTOM? That's right.

Pick up your copy of Dirt Rag at the local supermarket or book store and send in your entree. If you just want to subscribe, do so at: