Ok, so there are a few threads out there regarding manufacturers and what they make, have made, or will make.
Here's a run-down of happenings in the 650B Format.
Alex Rims: soon to deliver the XD-Lite disc specific rim. Eyeletted, 24mm wide, 19mm deep.
American Classic: Testing wheels, currently at prototype level.
Ahrens Bicycles: Added the 650B MTB Mezzo to the their line-up in February 2008.
Carver Bikes: Currently offering the Killer Bee in titanium, custom options available at no extra cost. The Bumble Bee is their 29/650B version, both currently Ti only. Aluminum Killer Bee in the works.
Coconino : another custom builder, showed a 650B rigid MTB at NAHBS 2008.
Engin Cycles: Offered a custom 650B for raffle at Interbike 2007. Drew Guldalian is a customer frame builder in PA. He has a couple 650B MTBs now under his belt since Interbike 2007. Dirt Rag currently testing one of Drew's frames.
Haro Bikes: These guys have been on the ball since 2007. Th
eir Beasley line will be shipping soon. Offered in a single-speed and 1x9. Steel frames with rigid Fat-Chance inspired forks. Also, they dropped their 29er Sonix project in favor of a 650B type Sonix. Very Rad.
Igleheart: Custom builder that displayed raw 650B rigid forks at NAHBS 2008.
Kenda: Showed their 2.2" Nevegal at 2008 Sea Otter, rumored to be also offering it in a smaller size soon, too.
Kent Eriksen: Built Pacenti's Ti hardtail form NAHBS 2007.
Kish Titanium: Added a 650B MTB to their line-up in January 2008.
Origin 8: J&B house brand displayed a 650B aluminum frame with carbon seatstays at Interbike 2008, no more word besides that.
Pacenti Cycle Design: Makers of the first production MTB tires: Neo-Moto 2.3" and the soon to be released Quasi-Moto 2.0". They are also offering custom Steel frames, made in the USA!
Panaracer: Offers 3 townie/rando tires:
Pereira Cycles: custom builder who received "Best Off-road Bicycle" at NAHBS 2007, builds 650B Townies.
Rawland Cycles: Producing a 650B only line-up consisting of the Sogn and Olaf; Steel offroad frames that will attack most terrains with ease!
Rivendell: Has been offing 650B rando bikes for years, and recently began shipping their off-road rigid: The Bombadil. Not enough room for the Neo-Motos, but the Quasi-Motos will fit!
Rock Lobster: Another custom builder with a 650B rollin' around: an old-school cruiser type.
Fox Racing Shox: Their fork line-up fits the 650B Neo-Moto, but Fox doesn't want us to use them.
Soma Fab: Prototype rigid fab'd up by El Camino Fabrication, killer burnt orange paint. They sent it out to Japan for testing, folks in the states are waiting for these to show up in shops.
Shamrock Cycles: One of the first small builders to display a FS 650B utilizing the Ventana 5" rear triangle.
Stan's No Tubes: offering their ZTR355 in 650B. My rims came in weighing 370g each.
Sun Ringle' : This components company offers 2 rims. The CR-18 has been out for a long while, and the Charger Wheelset is available using the Equalizer 27 650B rim.
Sycip: Added the 650B Diesel, can also build their Unleaded in a 650B format.
Vassago Cycles: Currently testing the Rapscallion full suspension 650B. They're still in prototyping, but be on the look-out!
Velocity Rims: Offering the Blunt and Synergy 650B rims, the BLunt is currently the go-to rim for MTB application.
Ventana: Currently shipping 650B FS rear triangles to custom builders. Also, offering the El Bastardo, a 4" or 5" travel Electric Sex welded aluminum FS bike.
Vicious Cycles: Added the Mambo Sun in both geared and SS models for the 2008 season. Debuted at Interbike 2007, now available in Ti or Steel.
Villin Cycleworks: Custom builder displayed 2 650B bikes at NAHBS 2008.
White Brothers: Offering the first 650B Specific Suspension forks
Weinman: Haro has spec'd Weinman's Discovey 650B rim on their Beasley line.
X-Fusion Shox: Offering the Velvet 80-130mm travel fork that accepts the Neo-Moto with ease.

This list will be ever growing, and I've only listed 650B specific components (except for the forks). I'm sure there are loads of custom builders out there, and I'm not trying to discriminate
them, I'm doing my best. Feel free to add custom builders who HAVE already produced a 650B MTB, not those who are planning on building them.
Posted 4:07 PM 4 comments:

the Quasi Moto is Coming 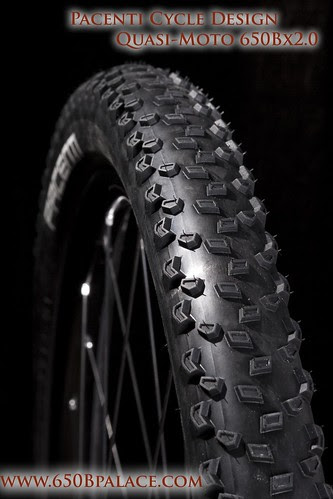 Be the first on your block to be on them! To find out how, bookmark this page, and visit often.
Posted 7:11 PM 4 comments:

There are alot of folks on MTBR, this is just ONE of their stories:

"Hi Cracked Headtube, and other 650bers! Just letting you know that Pacenti's tyres are now available in Australia through http://www.definitivecycles.com.au/ .
We are also the aussie Dealer for White industries and On One. We are just down the road from the Velocity factory and will be working with them and White Industries to provide Aussies with 650b wheelsets with Kirks tyres.

Stu, Thanks for the update! Our AU and Kiwi readers will really appreciate this info!


"You aren’t going to believe this, but we got 1st place in the open class! I haven’t really had time to train for this, for lots of reasons and was only hoping for a top 10-20 finish and on the 2nd lap I was really feeling it on the climbs, by no means am I in top shape right now. In terms of the bike, I have one word to say "awesome"! I am definitely sold on the 650B, and the 100mm came in handy, the descents were steep and rocky and the extra 20mm really made a difference. "

Rick is demoing a 650B MTB, and is now in the market for his own!

Snuck Up on Me

To start off, the Haro Beasely bikes will have Weinman Discovery Rims, and from my understanding this was a new size for them... Surfing the web I found the Weinman ZAC-19, 650B rim. I'm not sure how available they are, but Velo Orange has them in a 36H format.

From the Velo Orange Blog.

As a commuter I appreciate bike lanes. I REALLY appreciate when I get to use them.

So I've had my Quasi Motos for about 2 months now. They've seen pavement, gravel, sand, hard packed trails, and bog. They've seriously proven themselves. I'm not totally sure if it's the tire or 650B wheel size. A few years ago I was riding 29ers which handled the local sand nicely, but I nice liked the feel of the biggest wheel. I digress. The Quasi-Motos.
I have one pair of the tires, and 2 650B (converted) bikes, and 3 set of wheels, so I've kept the Neo-Moto of front and the Quasi on the back. The Neo grabs so nice on corners but I do admit it's weight is a draw back on the rear. I have my Stan's ZTR355 rims laced to American Classic disc hubs with Sapim spokes all built and tires mounted, Tubeless! This is my first personal experience with a tubeless setup. The Quasi is holding air tubeless great. Also, I was able to fit the Quasi-Moto in my Haro Sonix VL120's stock rear swing-arm. I think this tire will open MORE possiblities for 26" conversions.
Speaking of converisons, I also built up a White Industries ENO disc hub on a Velocity Blunt. I have Trek frame I want to put this on, but it has no disc tabs, and the Blunt has no rim area for brakes. Also, I failed to purchase the ENO caliper adapter. (dummy). I plan to Braze some disc tabs onto the Trek ( when I buck up and buy them) , At that point, an old Trek 930, will be a 650B convert too. We'll have to see. Ok, I realize I'm babbling.
Posted 9:57 PM 1 comment: