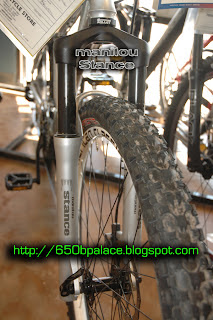 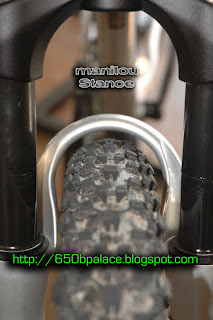 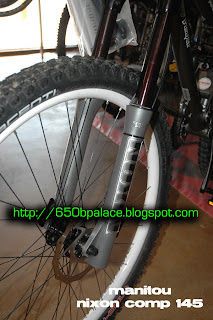 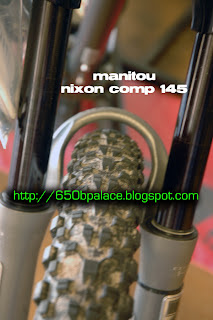 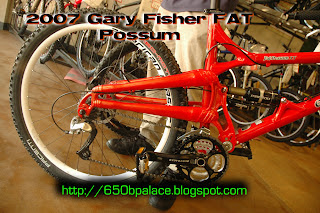 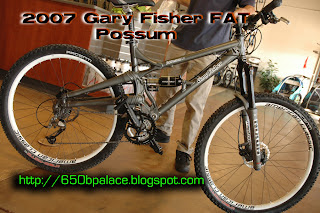 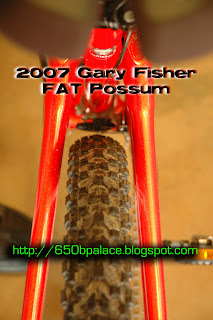 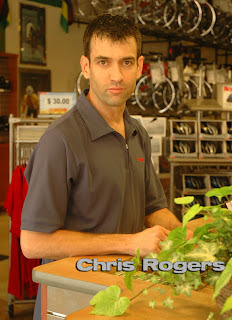 This weekend I stopped by the Trek Store in Lakeland, FL. Their mechanic, Chris helped me out, pulling bikes from the racks, and throwing the 650B wheels into them. We on found ONE model there that could accept, Fisher's FAT POSSUM. A single pivot all mountain ride, similar to Santa Cruz's Heckler. BUT, with the shock emptied of all it's air, the tire would hit the seat-tube, and the front derailleur's cable stop. This would occur ONLY if you totally bottomed out the shock. So, it would be a gamble. I pedaled the Fat Possum LX around the lot, B'r equipped, it felt much like a traditional 26" wheel, and looked the part too. The rear end had the clearance at the Seat and chain stays to fit the Neo-Moto.
For Forks, we found 2 QR models just big enough to handle the 650B wheel. First the Manitou Nixon, Comp with 145mm Travel. The Reverse Arch allowed the Neo-Moto, but not by much. As did the Manitou Stance ( equipped on the Fisher "Bitter"). I'll be swinging by another shop Monday after the j-o-b. Its a non-trek store, again, I'll have my camera and wheels! Check back soon!
Posted 7:57 PM

Did you not try any fox forks because we already know it should/will work?

Cannondale Specialized Scott !!!!
Forks that didn't work: Rock Shox, haven't found one that works yet from the RS camp. Shops in these parts cater more toward the road rider, so there is not many opportunities for fork checks. Next shop should be better....