There was a recent post on MTBR with a question about my VooDoo Bokor. So, I figured this would be a good time to post a bit of a review on my 650B conversion of the Bokor's 26" desgined skeleton.
To remind remind readers, I also have a full-suspension 650B conversion 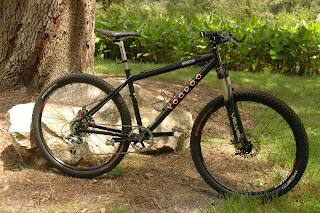 from a Haro Sonix VL120 ( with a modified rear triangle). Hands down the Bokor gets WAY more milage than my Haro. I've been a sucker for singlespeeds, as I grew up a bmxer, and my first MTB was a Trek 8500 ss. I built the Trek from scratch as a dedicated SS, and since then I haven't been able to ward off th single speed bug.
Back to the Bokor: Out of the box the Voodoo was setup as a single speed using its sliding dropout feature this was an easy setup. X-Fusion Velvet fork set at a full 130mm travel, TruVativ steering and cranks, American Classic SS QR hubs on Velocity Blunts, THE saddle (my new favorite). I've run both the QuasiMotos and NeoMotos on the rig, in a few flavors. QM front and rear, Neo front, QM rear, Neo front and rear, then Neo front and reverse Neo on the rear.
The sliding dropouts and S-Bent stays allowed for ample room through out the sliding range. Currently I have the QM on the rear, and the chain stay length is at its ultimate minimum: 16.5" I still have gobs of mud clearance. I'm sure I could get the CS length lower, but there is a small design flaw in these sliding dropouts. On the disc side the adapter mount bolt hits the frame at 16.5", limited the length reduction. If I were to run a linear pull brake I could then get a shorter CS length. I wouldn't sacrifice disc brakes for a 5mm less. 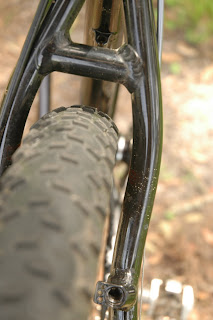 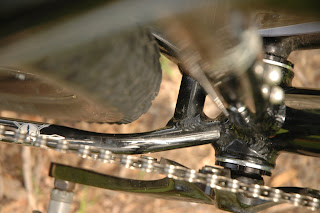 The Bokor is a trooper in the muck filled winding trails of Florida. The mentioned stays cleared mudd and transfered power like a champ. I should mention this frame was designed for a 100mm fork, so my choice for suspension wasn't ideal, but it still handled better than my past 29ers. On the Bokor I was constantly swirving around treacherous roots and mud bogs, and not once did I feel like the bike was too long or clumsy. The lightweight aluminum frame didn't kill me with harsh vibrations, perhaps my WTB Original Trail grips helped out with that. I'm also runnign a Titanium seatpost, for both weight reduction and buzz dampening.
So far I've been more than happy with my Bokor 650B conversion. To further test this versatile frame I've added a LX rear dérailleur and 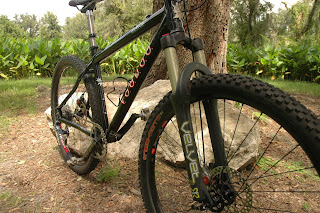 swapped the wheels for American Classic geared disc hubs laced to Stan's ZTR 355 650B rims with Sapim CX-Ray spokes. This wheelset is significantly less than the Blunt SS wheels. I've also set them up as tubeless with sealant. I'm excited to test this bike again. The Bokor may also get some commuting miles in with another swap to 700c disc wheels.
Posted 1:33 PM

Hey. I’m building up a Bokor, what do you think the max tire clearance is for the rear of the frame?

Hey. I’m building up a Bokor, what do you think the max tire clearance is for the rear of the frame?